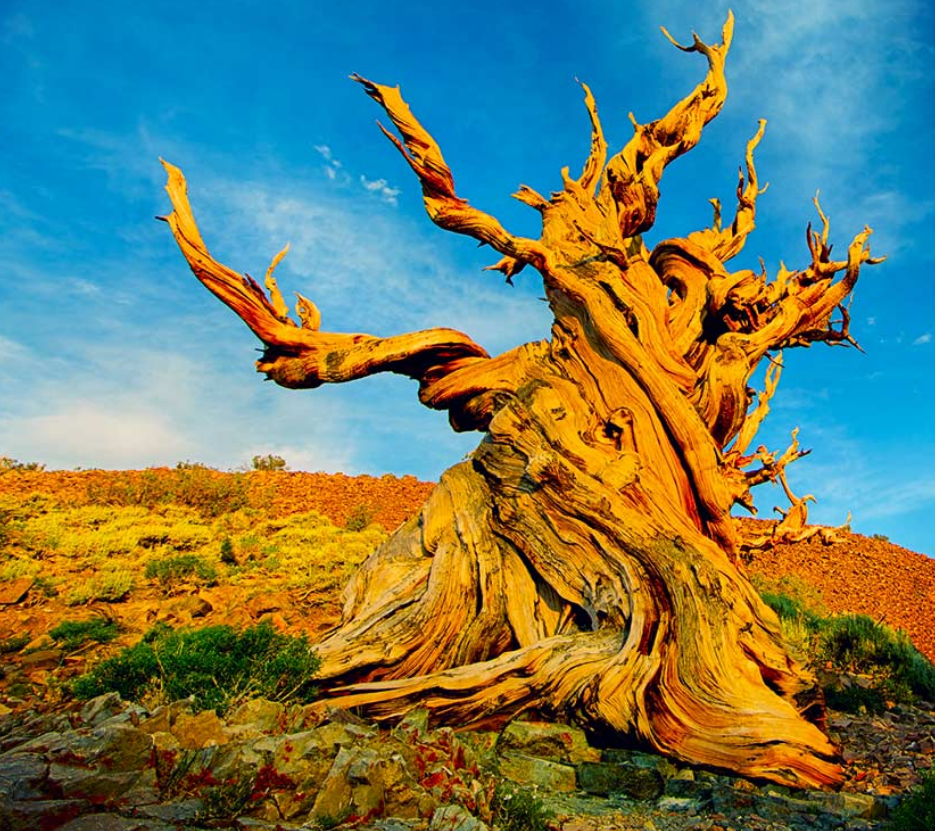 As a matter of fact, trees (along with certain other plants such as Namibia’s famous Welwitschia) make up some of the oldest known living organisms on the planet. Certain types of trees have attained incredible longevity through a number of unique capabilities, such as the ability to replace lost or damaged organs (above and below ground), a sectored vascular system that allows portions of the tree to survive whether or not the rest of the tree is alive, the formation of clone shoots whereby an existing shoot can produce a genetically identical offshoot, synthesis of defensive compounds to ward off invaders, a hormonal control system, and much more. Trees are indeed fascinating organisms!

Without further ado, let’s learn about some of the world’s oldest trees:

With a death-defying 4,842 years under its belt, this Great Basin bristlecone pine deserves its name. This is considered to be the oldest non-clonal organism (i.e., individual plant) on the planet. Stop and think about that for just a moment. This tree was a sapling at the dawn of the Egyptian civilization, hundreds of years old during the building of Stonehenge, and by the time Chinese civilization was just beginning on the banks of the Yellow River, Methuselah was already over 500 hundred years old. This is truly a staggering thought.

Methuselah is located 10,000 feet above sea level in Inyo National Forest in California. But in an effort to protect the tree from vandalism, its exact location remains a closely-held secret protected by the U.S. Forest Service.

Also known as the Trembling Giant, Pando is a clonal colony of a single male Quaking Aspen located in Utah. Each genetically-identical individual tree (or “stem”) is connected by a single root system. Spreading across more than 100 acres, Pando is believed to be over 80,000 years old and collectively weighs over 6,600 tons, making it the heaviest organism on the planet, as well as one of the oldest.

The “Cypress of Abarqu” is an ancient cypress tree located in Abarkooh, Iran. Also known as the Zoroastrian Sarv, this tree took root between 4,000 and 4,500 years ago, making it the oldest living organism in Asia.

A rural, Welsh-speaking village in north Wales is the site of Llangernyw Yew, the world’s third oldest, non-clonal tree. Located in the graveyard of St. Digain’s parish church, among primitive stone crosses made during the Dark Ages, this mighty yew tree has stood here for nearly 4,000 years.

If you were to walk up a certain unassuming hill in southern California, you would probably walk right past a stand of small, gnarled oak trees growing from within a pile of boulders. Yet, you would have just passed one of the oldest organisms in the world: a grove of clonal Palmer’s oaks believed to be over 13,000 years old. The shoots only measure a few feet tall and they grow outward from the site of the original shoot at a rate of approximately one-twentieth of an inch per year. They rely on fire to burn down the stems and trigger new growth. Unfortunately for the Jurupa Oak, suburban California is encroaching on all sides.

Who would think such a scraggy tree could be so old? Do not let looks deceive you. This 16-foot tall Norway Spruce, situated in the scrubby Fulufjället Mountains of Sweden, is an incredible 9,550 years old! This is the world’s oldest single-stemmed clonal tree. The actual tree trunk itself is only a few hundred years old – it is the root system that has stayed alive for nearly 10,000 years.

In 1993 scientists discovered this 150-foot tall Patagonian Cypress in the Andes Mountains of Chile. Unlike the Llangernyw Yew and the Sarv-e Abarqu, Alerce has been given an exact age of 3,637 years old using tree-ring width chronology. This makes it the second oldest tree to have its exact age calculated.

This is a Bald Cypress located in Big Tree Park in Florida. It is estimated to be nearly 3,500 years old and was once used as a landmark by Seminole Indians and other local tribes. It also holds the title of biggest tree by volume east of the Mississippi.

These are just a small handful of the world’s oldest trees.

There are many other ancient and mighty trees throughout the world. For example, the Jardine Juniper in Utah, General Sherman (the Giant Sequoia) in California, Jomon Sugi in Japan, Kongeegen in Denmark, the Chestnut Tree of One Hundred Horses in Sicily, the Olive Tree of Vouves in Greece, and many, many more. These trees have all stood the test of time and occupied our planet for the better part of known history. We hope you’ve enjoyed this tree knowledge from Case Mountain Tree Service.

Testimonials
Over the years Greg and his crew at Case Mountain Tree Service have completed several extensive and small projects at our home in Manchester. I’ve always found his work to be reasonable priced and accomplished with the high standards you would expect from a professional. I hold Greg’s company in high regard. A great value!
Bill AaronsonManchester
I would like to thank Greg Best for being there for me to remove the trees around the house and back yard over a 10 year period. I’ve had trees removed that would have caused a lot of damage if they fell on my house. I use Greg to do the job and always have been satisfied. Thanks Case Mountain Tree Service!
Mike U.Middletown
Greg did and amazing job cutting down 8 large pines on my property. He was fast. Look no further! He’s got my business every time.
Mike Z.Bolton
Great job at a very reasonable price. These guys are very personable and professional!
Deb PriorWindsor
Case Mountain Tree Service was on time and did great work at 18-20 Chalmers St. I will gladly recommend Greg to my friends for other jobs.
MariaManchester
Case Mountain Tree Service took down three large trees next to my house and limbed another hanging over it. They did a great job and I highly recommend them, and I have!
GregVernon
I have used Case Mountain Tree Service for over 10 years now, and have found Greg Best to be honest, reliable, reasonable and completely trustworthy! I would, without hesitation recommend this company.
Bob AlibrioALCO Investments, Manchester
prev next